Hear what some of Richie’s clients have to say about him and his influence on the entertainment industry.

Learn more about Emmy Awarding winning producer and casting director Richie Walls, his resume, and his vision for the entertainment industry. 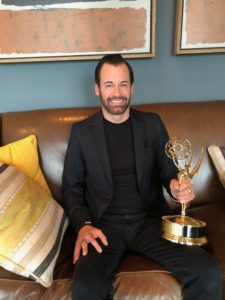 While attending a collegiate track meet, Richie was approached by a modeling agent at a local mall and his career in the entertainment industry was launched. He worked in New York, Miami, and Chicago as a model and actor through college. After graduating, Richie was offered an agent position at a local agency. From there his career in management continued grow. He has managed clients that are former Miss Universes, Miss USA’s, Victoria Secret Angels, and many big name actors varying from Broadway show Hamilton to Disney and Marvel movies. He has also had several clients guest star and series regulars on major network sitcoms. He worked for agencies in New York, Tennessee, and Florida before moving to Los Angeles in 2005. He started his Los Angeles career in Theatrical Directing and Agency Director for Warning Models in Beverly Hills. While there Richie booked high end fashion clients such as BCBG, RALPH LAUREN, MACY’S, ABERCROMBIE, SKETCHERS, PACSUN, ALLURE, D&G, JUICY COUTURE, VOGUE, MICHEAL KORS, COSMO, TEEN VOGUE, MAXIM, L’OREAL, NIKE, ADIDAS, REEBOK, GAP, LACOSTE, AND TARGET.

Richie made the decision to focus more as a theatrical agent in 2005 when the hit HBO show Entourage started using him for their casting needs which launched his success in crossing over from fashion to theatrical bookings. Since then he has been involved booking shows and films such as MARVEL MOVIES, HBO, SHOWTIME, ABC, NBC, FOX, CBS, DISNEY, NICKELODEON, ENTOURAGE, HOW I MET YOUR MOTHER, TRUE BLOOD, MODERN FAMILY, SONS OF ANARCHY, JANE THE VIRGIN, RAY DONOVAN, THE REAL ONEALS, PRETTY LITTLE LIARS, GROWING UP FISHER, GRACELAND, CSI, CSI NY, CSI Miami, THE SOPRANOS, FLASH FORWARD, LIE TO ME, GREYS ANATOMY, ELEVENTH HOUR, TRUST ME, HOUSE, THE MENTALIST, GARY UNMARRIED, 90210, GREEK, CURB YOUR ENTHUSIASM, PIRATES OF THE CARIBBEAN, CRANK 2, IRONMAN 2, COMMUNITY, JIMMY KIMMEL LIVE, VICTORIOUS, DAYS OF OUR LIVES, THE YOUNG AND THE RESTLESS, ALL MY CHILDREN, SPREAD, TAKERS, THE SURROGATES, THE LOSERS, FAST AND THE FURIOUS 4, THE SOCIAL NETWORK, COUPLES RETREAT, DOLL HOUSE, THE LEAGUE, TRUE JACKSON, CRIMINAL MINDS, THE MUPPETS MOVIE, NCIS: LA, THE GRIEF TOURIST, IT’S ALWAYS SUNNY IN PHILADELPHIA, DEAL OR NO DEAL.

Richie started Richie Walls Entertainment, International Talent Agency in Beverly Hills, CA, representing some of the top actors and models in the country. He was also the Vice President of FilmEngine Entertainment in Beverly Hills, CA that produced The Butterfly Effect with Ashton Kutcher, The Rum Diary with Johnny Depp, Hunters Prayer with Sam Worthington, and developed Snow White and the Huntsman with Kristen Stewart, Chris Hemsworth, and Charlize Theron. He then partnered with James and John Cameron, creators of Avatar, Titanic, Terminator, Aliens, and many more feature films, in the management company Cameron Rock Walls.

Richie and Whitener Entertainment Group produced “The Last Movie Star” with Burt Reynolds, Chevy Chase, and Ariel Winter which was shot solely in the state of Tennessee. A24 picked up the project after the world premiere at the Tribeca Film Festival 2017 and was released early 2018. Richie acted as Associate Producer and Tennessee Casting Director on the project, following his Associate Producer role on Sam Worthington’s Hunters Prayer. Richie and Black Walls Entertainment are currently developing, producing, and casting projects most formatted for the state of Tennessee. Richie won an Emmy Award in 2018 for producing and casting a series for Amazon called Backstabber. Richie and Black Walls Entertainment were Executive Producers on the new feature A Violent Man shot end of 2020 in the UK. They also were Co-Producers on Homestead shot in Tennessee end of 2021 starring Shane West, Leven Rambin, Jake McLaughlin, Sohvi Rodriguez, and Dee Wallace.

Keep up to date with various workshops, auditions, casting calls, and more!

There are no upcoming events.

We have offices in Beverly Hills, CA, Nashville, TN, and Knoxville, TN. Please, reach out with any questions.

Send an email to: casting@richiewalls.com

Richie Walls’ Modeling & Acting Masterclass is the perfect opportunity to further your acting and modeling skills and also learn the best way to market yourself in the entertainment industry. From headshot photoshoots and resumé critiques to modeling workshops and audition developments, this workshop will help you get your foot in the door and give you an inside look at Mr. Walls’ upcoming projects. In fact, Mr. Walls is continuously casting for TV shows and movies in the Tennessee area, so now is your chance!

The masterclass will include:

Richie Walls returned to Tennessee with over 20 years of big market experience in high fashion modeling, commercial acting, television, and film. After working with hundreds of top industry professionals such as Johnny Depp, Rob Schneider, and Ashton Kutcher, Mr. Walls has years of experience and insider knowledge to share.

The 2-day extensive Masterclass is $995. The masterclass is open to anyone aged 5+. If you are interested in enrolling or are looking to enroll, sign up below!

Here are just a few testimonials from Richie’s ever-growing list of clientele.

Here are just a few of the projects Richie has worked on over his career.